“Did you read it?” she asks just before taking a sip from her michelada.

“Journalists are not the enemy”, The Boston Globe.

“A Free Press Needs You”, The New York Times.

“Think your enemy is the press? So does every tyrant and corrupt politician”, The Star-Ledger.

“Yikes!” she says under her breath.

Then with a half-smile on her face, she goes down her own list:

“Stop the war on a free press”, The Philadelphia Enquirer.

“The Journal Gazette?” I ask.

“I hear it’s north of 300 editorials and counting”, she continues right before taking a more pronounced sip of her drink.

Becca, a reporter friend of mine in New York City, and I make it a point to catch up once a week at a different watering hole while I’m in town on a special assignment for the summer. On a particularly uncomfortable ninety-degree day we cooled off on micheladas in the West Village and chatted it up about The Boston Globe’s call to action against President Donald Trump’s incessant attacks on journalists. Newsrooms across the country joined the August 16 campaign by writing editorials condemning charges of “fake news” and “enemy of the people” and defending the Fourth Estate.

“Where’s NAHJ in all of this?” She asks referring to the National Association of Hispanic Journalists, the organization where I serve as president.

“NAHJ is a champion of the first amendment”, I say. “And as such, condemns any action by Mr. Trump or anyone who impedes the freedom of the press”, I assert. The challenges of covering the White House was part of the programming and dominated conversations at NAHJ’s International Training conference this year. The same happened at other like-kind journalism organizations like the National Association of Black Journalists (NABJ) and Asian American Journalists Association (AAJA).

At the conclusion of its national conference, the NABJ board passed a resolution condemning attacks by President Donald Trump and his administration on press freedom. In her acceptance speech, AAJA president elect Michelle Ye Hee Lee acknowledged, “This is a challenging time in our industry — attacks against the integrity of our profession and press freedom…”

So, as I nursed my drink, I could almost predict what Becca was about to ask next. “Right, but what is NAHJ doing about it?”

The time has come for journalism groups representing minority communities to come together, again.

Unity: Journalists For Diversity dissolved this year. The organization born Unity: Journalists of Color in 1990 struggled after founding members NABJ and NAHJ seceded for a number of reasons including finances. I led the departure of NAHJ during my first term as president by successfully arguing that Unity, as a business proposition, no longer served the best interest of NAHJ. Still, NAHJ leaders and I believe in Unity’s chore mission of collaboration in championing for the recognition and professional advancement of minorities in the news industry. NAHJ still works on independent projects with diverse journalism groups including another founding Unity member, the Native Americans Journalists Association (NAJA) which participated at this year’s NAHJ conference in Miami.

Now that Unity no longer exists or any of the constraints which motivated the exit of some of its founding members; now, I think is the right time to start conversations about reunification. In this unprecedented time where the President of the United States is inciting the public by calling journalists the enemy and widening the rift between communities, often exploiting it for political gain – the reuniting of journalists of color is of the utmost importance. In addition, that includes the National Lesbian and Gay Journalists Association (NLGJA) whose members proudly wave a multicolored flag. 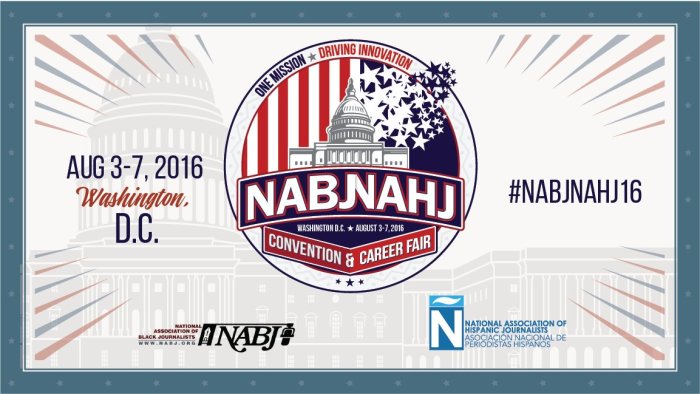 I am proud to have facilitated One Mission, Driving Innovation in 2016, the first NAHJ/NABJ joint conference because of the benefit to the organizations’ members, its shared mission and journalism. The commitment by the storied groups to host another conference in 2020 is testament to the success of working together. I believe we can do better by exploring a mega conference inclusive of AAJA, NAJA and NLGJA.

There is no greater need for Unity than now.

Members of these organizations are not only under attack for being journalists, but also discriminated against for being one of “the others” based on race, ethnicity and sexual orientation.

As president of NAHJ, I will reach out to my counterparts at NABJ, AAJA, NAJA and NLGJA to not just engage in discussion and debate about what we can or can’t do, but better yet, what we should do.

Yes, alone we are STRONG, but, together – we are POWERFUL.

One thought on “Come Together: Journalists of Color”